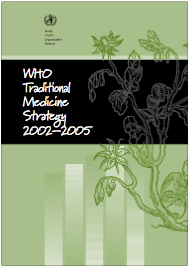 This strategy was developed by WHO Headquarters and Regional Office staff working in essential drugs and medicines policy, in consultation with other WHO programme staff and with key development partners. It was then finalized in consultation with representatives from Member States,the wider UN family, nongovernmental and other international organizations, WHO Collaborating Centres for Traditional Medicine and WHO Expert Committees.

It covers country, regional, interregional and global work, and builds on discussions held during the WHO Consultation on Methodologies for Research and Evaluation of Traditional Medicine (11—14 April 2000) attended by experts in traditional medicine, as well as by WHO Headquarters and Regional Office staff working in traditional medicine. The meeting was followed by a series of conference calls between WHO Headquarters and Regional Offices, as well as conference calls with Member States and UN partners, to review drafts of the WHO Traditional Medicines Strategy 2002–2005.

Indian government and the World Health Organization (WHO) have signed a Project Collaboration Agreement (PCA) for promotion of traditional medicines, an official statement by the ministry of AYUSH (Ayurveda, Yoga, Unani, Siddha and Homeopathy) released on Saturday said. The agreement was signed between Ajit M Sharan, secretary at ministry of AYUSH, and Marie Kieny, assistant director general of health systems and innovations at WHO, in Geneva on 13 May in the presence of Shripad Yesso Naik, minister of state (AYUSH), and Margaret Chan, director-general at WHO.

The PCA is titled "Co-operation on promoting the quality, safety and effectiveness of service provision in traditional and complementary medicine between WHO and AYUSH, India, 2016-2020." It aims at supporting WHO in the development and implementation of the "WHO Traditional and Complementary Medicine Strategy: 2014-2023" and will contribute to the global promotion of traditional Indian Systems of Medicine, according to the statement. It also envisages to promote and integrate traditional medicines in the national healthcare systems and will deliver for the first time WHO benchmark document for training in Yoga, and for practice in Ayurveda, Unani and Panchakarma. While commenting on the agreement, an AYUSH minister said that the initiatives undertaken by India in traditional medicines sector align with the WHO Traditional Medicine Strategy 2014-2023. The PCA will enable India's long-term collaboration with the WHO in the global promotion and integration of AYUSH systems of medicine by including Ayurveda and Unani in the international classification of diseases and the international classification of health interventions, according to the statement. India had earlier partnered with the United States to devise cancer treatment through traditional medicines during the two-day U.S.-India workshop on traditional medicines (March 3-4), which was attended by researchers from both the countries.